As I collect Old Britain Castles, a pattern introduced in the 1900s in Britain by Johnson Brothers, I thought it would be fun to begin looking at the castles that are featured on these beautiful dishes. Today, in the mail came a haul of three salad plates, featuring Belvoir Castle. 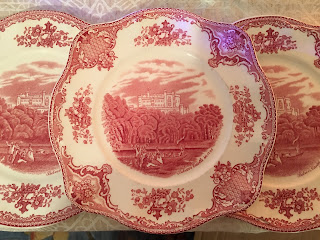 All of the engravings on this pattern were done circa 1792, and here is how Belvoir Castle looked then. 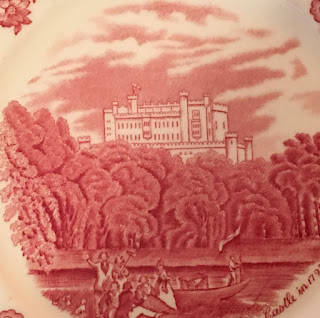 I was so pleased to find that Belvoir Castle is not only still with us, but it is magnificently well kept, and currently under the care of the 11th Duke of Rutland. You can visit their website here.

Belvoir Castle is the ancestral home of the Dukes of Rutland. The family have lived at Belvoir in an unbroken line for almost a thousand years.  Crowning a hill in Leicestershire, its turrets and towers rise over the Vale of Belvoir like an illustration in a romantic fairytale.

The land was a gift from William the Conqueror to one of his Norman barons – Robert de Todeni who fought for him as his Standard Bearer at the Battle of Hastings in 1066.  The first castle which was begun in 1067, was constructed primarily to defend its Norman owners from attack, and so took full advantage of its defensive position high up on the ridge.  By 1464 the Wars of the Roses had taken their toll on the building and it was more or less in ruins.  Some 60 years later it rose again, but as a nobler structure with a central courtyard, parts of which can still be recognised today.  But in 1649 that too was destroyed, by Parliamentarians after Royalists had seized it during the Civil War.  Its third incarnation, began in 1654 was designed as a large family home with no connotations of defence or war.

The castle you see today finally emerged in the early 1800s and was built for the 5th Duke and Duchess of Rutland between 1801 and 1832 by architect James Wyatt.

The castle was given the French name Belvoir – meaning beautiful view – now pronounced ‘beaver’ remains as one of the most magnificent and beautiful Regency houses in England.

Here is an engraving from wikipedia, which says "A plate from Jones's Views (1819), showing Belvoir Castle's dominant position overlooking the Vale of Belvoir." 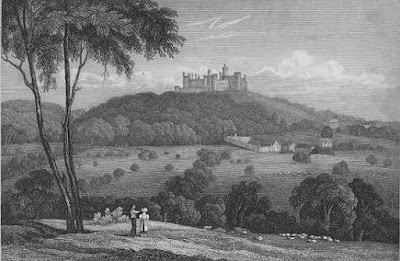 Where is Leicesterhire? It is North of London by a fair ways, with the nearest city being Nottingham.

How does the castle look today and does it still compare to the engraving featured on my salad plates? 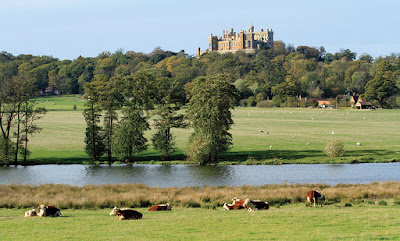 The front part of the castle appears to have been painted yellow, and it was possibly rebuilt after the engraving was done, but it is a very handsome castle! 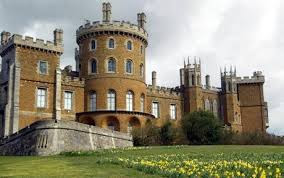 And the inside appears to be stunning! 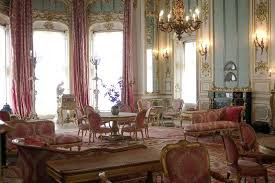 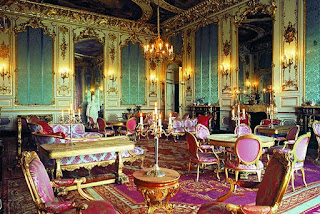 Put this on my list of places to visit, one day, on my Old Britain Castles tour of England!