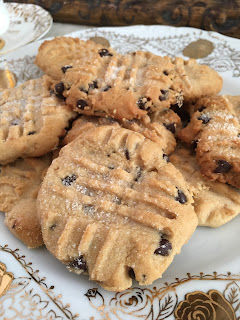 You may know a friend for some time, and feel you know them well, and you probably do...until that one moment in casual conversation where you realize that massive gaps in your personal philosophies exist. It can be as seemingly simple a statement as "Peanut Butter cookies have to be crispy." Thus declared the First Lady of Frosting this week as we pondered recipes for our next baking project. Crispy? Crispy peanut butter cookies? Not as crispy as ginger snaps, she clarified, but still, crispy. To me, a peanut butter cookie needs to be moist in the middle, salty and peanutty, mostly soft on top but a little bit of a crust on the bottom. Crunch from peanuts is expected, but it is not a crispy event. Being sensible souls we turned to Joy of Cooking to guide us in the matter of just what is a peanut butter cookie. After all, if Joy of Cooking doesn't know what a peanut butter cookie is, then the civilized world should crumble...like an over-baked cookie!

But it seems even Joy of Cooking can have differing opinions, and they offer two recipes, with fairly different ingredient lists. One is the classic, which you can see on their website here. The other recipe is from their Fourteen in One Master Recipe, which forgoes rising agents and uses superfine sugar. 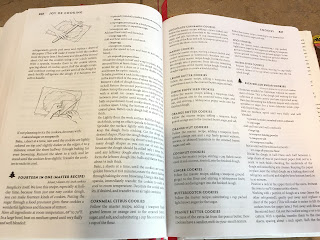 Both use only 2/3 a cup of peanut butter, which did not seem right to us. Regardless of our texture requirements, we both like a very peanutty flavor in our PB cookies. But off we went, the First Lady of Frosting on Kitchen-aid duty and I was left unsupervised with two defenseless jars of peanut butter, some of which went into the measuring cup, and some of which disappeared under mysterious circumstances...I contend that abduction by aliens is the only explanation. 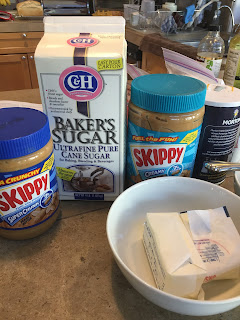 We mixed, measured, and deployed the FLOF's patented crisscross technique (dip fork in sugar, then crosshatch with it). 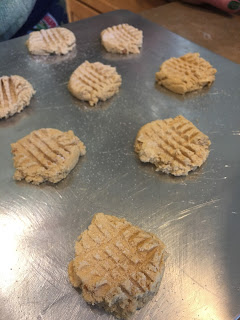 I have to say, both recipes yielded cookies that looked pretty much the same. Except when baked, the classic recipe resulted in loosely bonded particles of sand that, when bitten into, exploded into a cloud of peanut dust. They broke apart if I even glanced at them. Very tasty and very pretty, don't get me wrong, but likely to sail away in a light wind. The master recipe yielded cookies that were a little denser, and we speculate that is because the dough spends half an hour in the refrigerator. The taste was pretty much the same as the other recipe, a bit lacking in peanut flavor, and very light and sandy. On the other hand, I can't stay mad at something that looks this pretty: 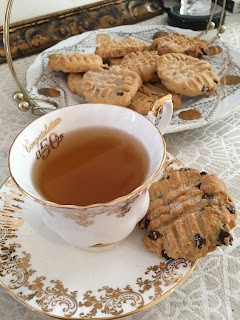 I cannot help but feel that further forays into other cookbooks will be necessary to find the perfect peanut butter cookie recipe. But such is my commitment to the cookie quest, that I'm willing to soldier on!