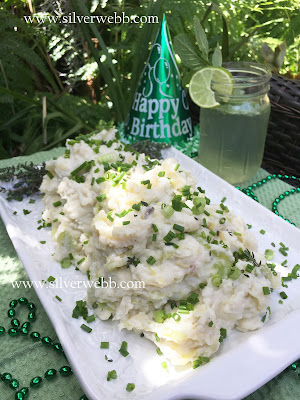 Happy St. Paddy's Day! May the luck of the Irish be with ya! Today I am going to a St. Paddy's Day party for a dog. That's right. Because if a dog is born on March 17, and he's a special pooch, he gets his own shamrock-filled birthday party. There will be corned beef and boiled potatoes and green cider. But as I am Ms. Veggie Pants, I googled a bit to find something vegetarian to bring to this feast, and came up with Colcannon. It is the Irish masterpiece of mashed potatoes with fried cabbage, onions, and leeks mixed into the fluffy mash, inundated with as much butter and cream and milk as it can hold without dissolving. In short, it is a dish that even I can make. BUT...I didn't calculate the sheer brute force it would take to cook, peel, and whip ten pounds of potatoes, or chop two heads of cabbage, three onions, and three leeks. It didn't occur to me that a pot big enough for ten pounds of potatoes would take 40 minutes for the water to boil. Or that I would need two giant paddles and biceps of steel to mix it all together. But fortune favors the fool, I suppose. 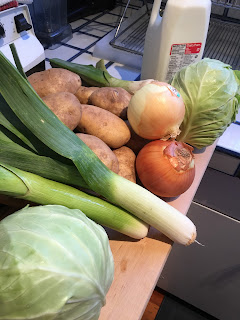 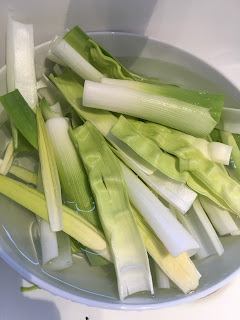 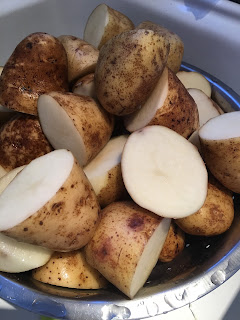 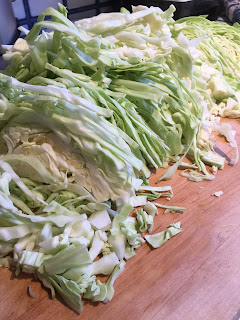 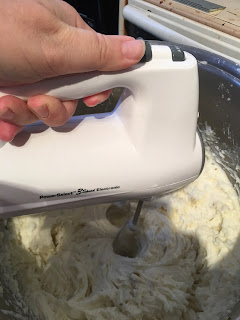 I used three sticks of butter...one of which I melted in the cabbage and onions as they were frying... 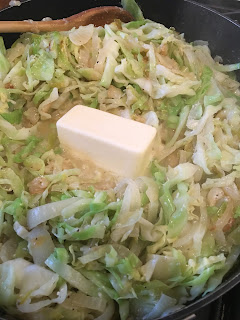 This is the kind of cooking that makes me feel deliciously lavish. Sure, why not throw another stick of butter in? Maybe another cup of cream? Yeah, go for it! And my ten pounds of russets turned out to be thirsty, thirsty tubers, because it seemed no matter how much liquid gold I added, they held together. I swear, I wanted to face plant into the pot of this: 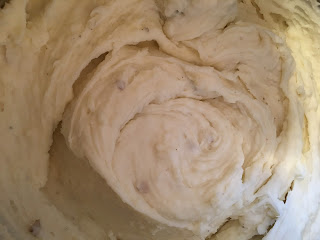 And once it was all mixed together, I have to say, it was not bad looking. 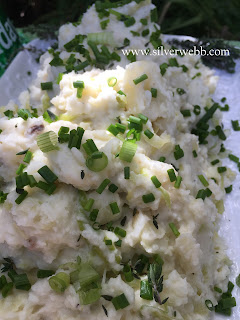 The end result is perhaps the emperor of comfort foods. Creamy, decadent mashed potatoes, the bitter and the sweet of fried onions and cabbage...my research suggests that as calorie dense as this is, the Irish take great glee in making a well in the middle and adding a small lake of melted butter. It is, of course, far too rich for a pooch to eat, but the humans at his birthday party will partake.

Here is to a happy Paddy's Day, whatever it is you may be noshing, nibbling, or swigging! 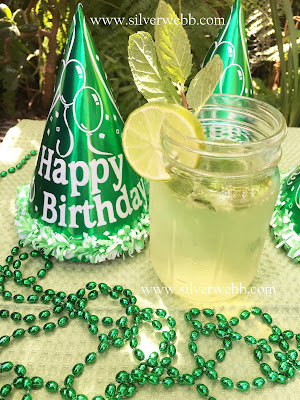