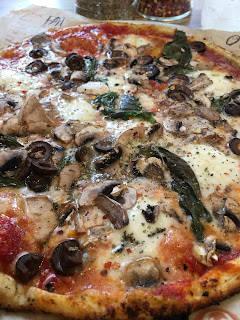 Pi. As far as I can tell it’s an unending number worshipped by scientists that has the sole purpose of perplexing and annoying the rest of humanity. Because 3.14 is never quite correct, you know. It’s got like 100,000 numbers more after that. Whenever Pi showed up on a math test it meant I was going to get a C-. So says the slightly bitter liberal arts major. Pi shmy. Pie, on the other hand, of any variety except meat pie, is something I am willing to contemplate with the patience and deep thinking of a Greek philosopher. Well, some people dabble in nuclear physics…and I dabble in pie! Happily enough those two disparate interests converge today, March 14 (3/14, get it?), otherwise known as Pi day. 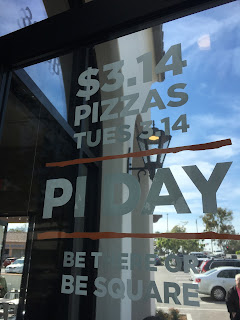 Blaze, the new pizza place in Santa Barbara celebrates Pi day by charging $3.14 for one of their personal pizzas. I was reading Will Write for Food on the bus ride home, getting more and more excited about developing as a food writer, and was absorbed in the chapter that says, accurately, that most bloggers go by the rule that you shouldn’t ever say something mean about a place in your blog. If you have nothing good to say, just don’t say it. Apparently, real food writers must break it down like a bull-dog prosecutor, otherwise our voices are just not believable. How lucky for me, then, that I was about to have a truly mediocre food experience, with a zinger of a punch line (wait for it). In I went to Blaze Pizza, a chain vaguely associated with basketball player James LeBron, and put down my $3.14 for a thin crust pizza with mozzarella, basil, olives, and mushrooms with a brush of garlic pesto on the crust. I was suspicious of the fact that they just stick a lump of dough in a press…like they are trying to press the life out of it. Tortillas are made like that, but pizza should be spun in the air, fussed with, stretched, and treated like royalty. Not crushed to an inch of its life. But still, once the toppings were on, it looked charming enough. 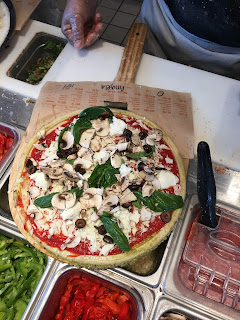 I will grant you that there was a long line, and the oven man appeared to be flinging pies in and out like a pizza devil-octopus. But the minute I laid eyes on my pizza, I knew I was in trouble. Little puddles of water around the mushrooms and not a brown bubble in sight on the pizza or the crust. And yet, the bottom of the crust was catastrophically cooked and the texture of the overall structure was pretty much a Frisbee. As in, I could’ve tossed it across the room and it would’ve caught a lot of air. It would’ve flown, while Bette Middler sang “Wind Beneath My Wings.” 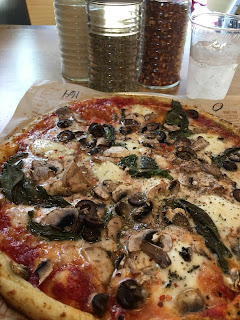 The ingredients were fine, although the sauce was a little vinegary, but the crust was beyond redemption. Even the Pope would not forgive that crust. As for the punchline, the zinger….I had several pieces left and took them in a to-go box. At the bus stop, there was a man sitting next to me who was clearly down on his luck and had his possessions in plastic bags. I asked him if he would like my pizza, and his eyes brightened up. But as I handed the box to him, he took a closer look, and decided that he didn’t want it. Yes, the homeless man rejected the Blaze Pizza, because he has his principles. That, I think, ends this review.