It's a Tuscan Easter! Wine Cake from the Tuscan Sun Cookbook 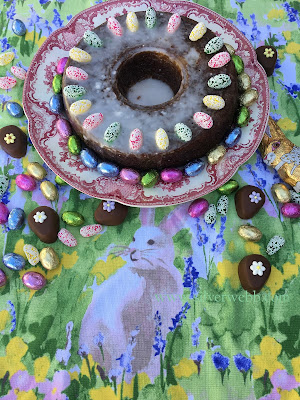 Happy Easter! Or as they say in Italy, Buona Pasqua! As this is Tuscan Month here at Silver Webb's Salon, I spent many gratifying moments contemplating the dessert section in Frances Mayes's Tuscan Sun Cookbook, which I've been cooking from this month. The dessert section is not all that packed, perhaps because, as Frances says, Tuscans are not big on sugary deserts and mainly prefer fruity-based desserts like peaches with almond cream or fig & walnut tart. I wouldn't say no to either of those, but for me, Easter means sweet treats in quantity. So I picked "Massimo and Daniela's Wine Cake." 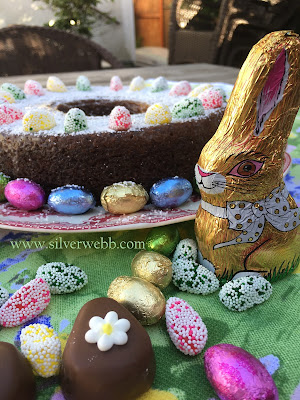 The ingredients to the Wine Cake seemed delightfully indulgent to me. Ricotta cheese, eggs, a lot of butter, a little flour, and then a swig of Vin Santo wine...okay, I don't have Vin Santo, so I used Italian elder flower liqueur instead. It came together rather quickly, and into the oven it went for thirty minutes...okay, it took forty-five, which is fifteen minutes longer than the recipe suggested, and I became nervous as the edges browned like a pancake. But in fact, the entire outside of the cake is quite brown (it looks like chocolate in the photos, but there is none in it). The inside was quite eggy, the cake texture intensely moist but very light. The crumb was so saturated with butter that it almost looked greasy in places, and the pine nuts gave a "masculine" slant to an otherwise delicate cake. The elder flower liqueur gave it a floral cloud that I didn't dislike. I am still not clear why one side of the cake sank and the other didn't...it's not like I drop-kicked the pan. 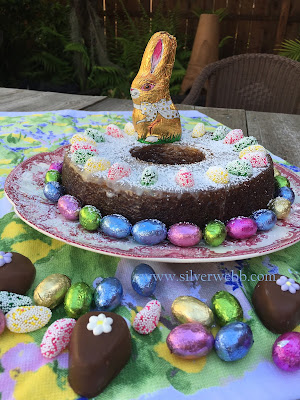 Unlike the Tuscans, who I am pretty sure would eat this with nothing but a glass of wine, I doused mine in glaze made with confectioner's sugar and elder flower liqueur, then laid on a blanket of Easter candy! Then I went a step further and made a kinda-sorta version of the cookbook's "Cherries Steeped in Red Wine." Cherries are not in season now, and so I settled for a bottle of Morello cherries in juice. I tasted one straight out of the bottle and was underwhelmed. So I soaked them in sugar, lemon zest, lemon juice, and a good glug of wine. They were passable. Nothing to make the Easter Bunny fluff his tail and dance a jig. However, I found that with cake and ice cream, I could bear the cherries rather well, indeed. 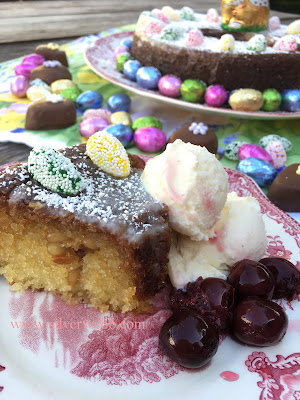 I will make this cake again when I have Vin Santo, and I'll try the cherries in wine when I have some juicy cherries from farmer's market. In the meantime, Happy Easter and buon appetito!