Episode 2, in which our heroine (that would be me, Silver Webb) continues on in her taste-testing of recipes from The Tuscan Sun Cookbook... 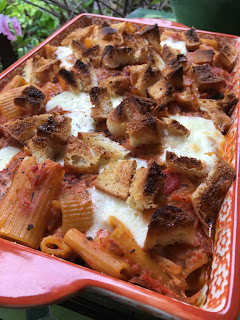 I have a soft spot for bunnies. Wittle fuzzy buzzy bunnies. I don’t eat them. Neither do I eat baby lambs or cows or anything with a beak or hooves. So I may or may not have shrieked when I turned to Page 123 of the Tuscan Sun Cookbook and saw a large picture of a man proudly holding a dead rabbit by its hind legs. I understand the farm-to-table idea, and also the fact that Europeans are more frank about the nature of the food chain.  I just wish they'd spared us the visual in the cookbook.

Which is to say, I am constantly trying to figure out how to alter recipes to omit the meat. And the recipe for “Baked Pasta with Sausage and Four Cheeses” looked good to me, just minus the pound of fried sausage. The base of most of the sauces in this book is “sofrito,” which is very finely chopped and sautéed carrot, onion, celery, and parsley. The cookbook's ratio is mostly onion with a bit of carrot and celery. And only a cup of it is used in this recipe. Because I was not using meat, I went with two cups of sofrito, and used equal parts onion, carrot, and celery. I subbed basil for parsley…because parsley makes my tongue want to curl up and die. This is probably a good moment to bemoan the fact that I don’t own a mezzaluna (a curved blade used to chop herbs and vegetables). The cookbook's sofrito looks like it is minced to an inch of its life. My sofrito looks like I gave it a Swedish massage, even though I spent a solid twenty minutes hacking at it with a big knife. 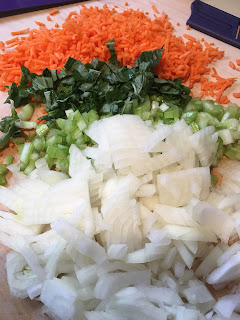 But not to be deterred, I sautéed away, with half a cup of wine and some oregano added, then a big can of chopped tomatoes. But when I tasted....Blech! It didn’t taste good. Probably because I omitted the sausage, which has a ton of spice and flavor. So, I prinked. I upped the salt, the oregano, added in dried basil and thyme, a dash of red pepper flakes, a chug of balsamic, and then a sprinkle of sugar (people look at me weird when I mention sugar in sauces, but I tell you, it has saved many a pasta sauce for me). After I had the sauce rolling along in the right direction, I boiled a bag of rigatoni, which is pasta tubes the size of steamrollers, then mixed in the sauce, half a cup of pasta water, a waterfall of mozzarella, fontina, and ricotta cheese. A few breadcrumbs on top and into the oven to toast for 20 minutes. The result was really surprising to me. It has a very light flavor, perhaps because there’s no garlic in it. A sweet, fresh tomato sauce, with a hint of crunch from the celery, luxurious strings of melty cheese, and some buttery bread bits on top. It is a lazy woman’s lasagna, really. An hour to make. The ricotta is lovely and sweet, the fontina is waxy and Gouda-ish, and the mozzarella is fresh and salty. The fourth cheese was supposed to be parmigiano-reggiano, but I used all of mine up on the pesto recipe I made the day before. 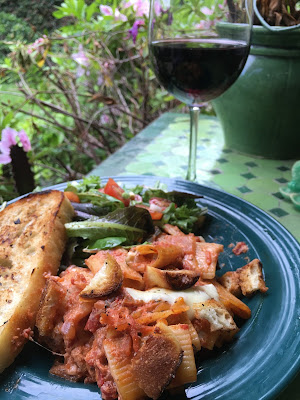 Even though it was an overcast day, I rolled with the dining outdoors Tuscan thing and ate on the front porch. I was cold. But the food was good!