Santa Barbara Blueberries: Blueberry-Picking Adventures in the Wilds of Buellton 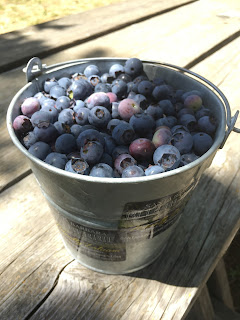 Blueberries, ah blueberries...was there ever a more perfect invention? My childhood awareness of them began with that most tender, well-acted, and sophisticated of movie scenes: Violet Beauregarde, unrepentant gum chewer, turning into a human blueberry and being rolled away by Oompa Loompas. I didn't chew gum for a year after I saw Charlie and the Chocolate Factory, but it didn't do anything to dim my affection for blueberries. In fact, I wondered if Violet Blueberry Beauregarde wouldn't make a rather fantastic blueberry pie! But cannibalistic fruit fantasy aside, I've always loved blueberries. 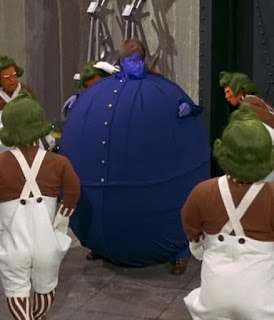 So, it was with unhinged but still-socially-acceptable excitement that I said yes to the FLOF's invitation to go blueberry picking in Buellton. The "Blubaru" was packed three-to-a-seat with blueberry fiends, and off we went into the wilds of Buellton, a rural part of Santa Ynez. A few years ago, I accidentally took the turnoff to Buellton on my way to Santa Barbara. For those who have traveled south on the 101, you will recognize the giant billboard that says "Buellton, home of split pea soup." But driving down the rural main street, desperately needing to take a pit stop, there were only a few run-down shops, and they looked like the beginning of a horror movie...you know, where the college kids stop in the country for gas and end up chased by an evil clown with a chainsaw. There was not even a Starbucks to save the situation. I rolled up the windows and jetted out of there as quickly as possible. But suffice it to say that on this latest visit, I was pleasantly surprised to find that Buellton now boasts a Panda Express, Chipotle, and even a Hamburger Habit (although it IS right next to a tractor supply store).

And not too far from the newly retooled downtown Buellton is Santa Barbara Blueberries, a few acres of blueberry bushes nestled in rolling golden hills and little shrubby oak trees. This is a Mom n' Pop place that grows blueberries, blackberries, and raspberries, depending on what time of the summer it is. Their website claims that on a good day, you can pick 2.5 pounds in 15 minutes. That being the approximate amount of blueberries that will fit in one of the metal pails they give you. 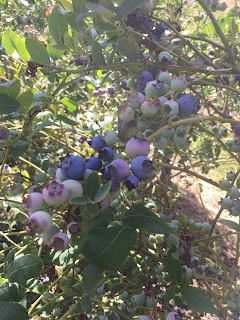 We'd received the secret blueberry missive that there would be a special opening, just for "Berry VIPs" to enjoy a bounty of juicy berries before everyone else descended on the patch. And I'm sure that all of this might have played out that way...if it were not also Mother's Day…when half of Santa Barbara County came with their children to celebrate the occasion. By the time we pulled in, they'd had to open the second "parking lot" (it’s a field...don't come expecting a smooth walking surface). It took about two hours for me to fill my pail. Possibly I dallied. Possibly I ate about ten pounds of blueberries straight off the bush as I picked. Or more probably it is true that the hundred people there before me had already picked the ripe ones. So although I had some very edible, mid-sized blueberries, it was not the zaftig extravaganza I'd expected. 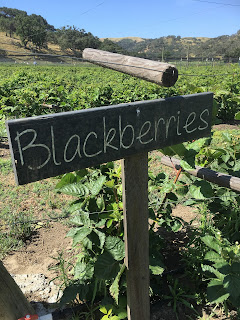 There were toddlers melting down from too much excitement. And there were bugs. Big ones. And I was wearing flip-flops. A spider even leaped on my finger as I picked a blueberry, causing me to shriek and hop up and down like an elephant that has spotted a mouse. For the last half hour, determined to fill the pail, I soldiered past sparse bushes, convinced I had a brown spider bite on my finger or was about to be attacked by rattlesnakes (well, there were holes in the ground...How do I know what lives in there?) But at last...at last the pail was full (confession: the FLOF had to donate some of her berries to my bucket). Like a mirage on the horizon, I saw the berry shack where we would pay $20 for each pail. As I got closer, I realized that about twenty other people had beat us to the cash register, and the couple that run the farm looked like Armageddon was upon them. This was clearly the most people that had ever visited the berry patch at one time. 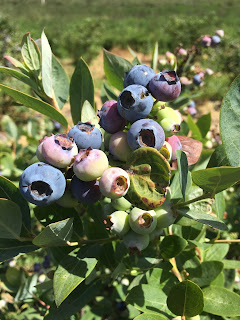 Still, even with the long wait, even with the spider sneak-attacks and toddler meltdowns (you tell me which is worse), I have to say I enjoyed the day immensely. The farm is beautiful, some cows may or may not wander by and moo at you, and there is something very satisfying in picking fruit that you are going to eat. I got back in the Blubaru feeling like a valiant blueberry warrior with my 2.5 pounds of blueberries that will become blueberry desserts very shortly. 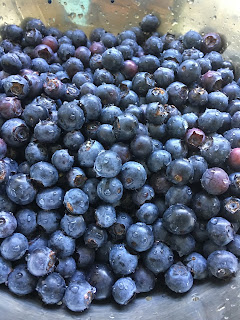 To summarize, I recommend that you go…any other day of the year except Mother’s Day!