A Review of Chuck's of Hawaii Steakhouse: Dead Men Tell No Tales 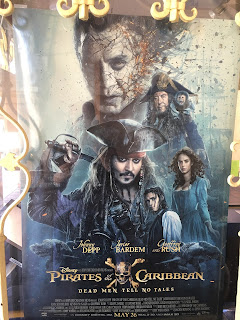 "Yo ho ho, a foodie's life for me," I always say. And this being the Summer of Tiki, we started off with what I thought was a brilliant plan. Dress like pirates, go to the movie theater for the latest Pirates of the Caribbean, and then off to Chuck's of Hawaii Steakhouse for Tiki fare. After all, what goes better with pirates than a tropical beverage?

On the topic of Jack Sparrow: Adoration for the first movie would be a slender word to capture my feelings. But since then, the franchise has done what franchises do: grown a bit over-inflated, hard to follow, and gentrified. Why is it that the characters so often become caricatures of themselves after the first movie? Nonetheless, pirates have a heady allure, and I put on my best Jack Sparrow head scarf...which I crocheted, beaded, and hot glued for the occasion...because I am daft as Captain Jack himself, although armed with a crochet hook instead of a bottle of rum. 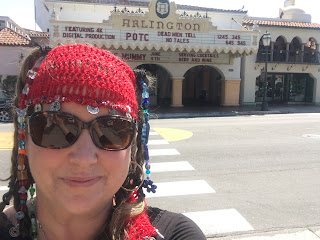 Popcorned, red-vined, slurpeed, and seated next to Captain FLOF and her consort, the music swelled, the curtain rolled aside...and we sat through 2.5 hours of fairly incomprehensible plot (we're smart cookies, but this convoluted whale of a tale had almost no rhyme or reason) and a slurring Johnny Depp. The essence of Jack Sparrow is dialogue that is irreverent, quirky, and funny. That's the whole point. He's a PIRATE. Pirates are rock n' roll on a galleon; they're bad, bad boys (and girls) who are out for plunder, rum, and a party. To wit, Keith Richards has on occasion played Jack Sparrow's father to great effect. This movie? They got Paul McCartney to dress up as a pirate...and that, I think, is the final nail in the coffin of ol' Jack. Because he pretty much stumbles through this movie with no reason to be there (see previous point about lack of a plot), Captain Barbosa has a Christ-like turn of character that is mystifying, Will Turner and Elizabeth Swann have leaden cameos, and the two young leads are adrift in a water-logged shipwreck of confusion. Oh, and Joachim Bardem, an actor I otherwise adore, staggers through the film with his head enlarged by special effects, so that it is bulging at you through the screen, as he tries to eke some smidgen of character out of the dialogue. He doesn't even have a sword fight with Captain Jack (in fact, Captain Jack wields no sword in this movie at all).

But still, there were some great visuals, jaunty music, and once or twice I laughed. Once or twice. OKAY, FINE, I frickin hated it! Ta, Jerry Bruckheimer, ta very much for killing one of film's most beloved characters by smothering him with pg-friendly mediocrity. Why in the blazes would you give Jack Sparrow to a pair of directors who can claim Kon-Tiki and Max Manus as their big feature films and a writer who had his finger in Indiana Jones and the Crystal Skull? Were you *trying* to keelhaul the film? Were you *trying* to double-cross and strand this movie on a desert island? If so...well, I suppose that's very piratey of you. But a misfortune for the 77 million suckers who handed their doubloons over on opening weekend.

Still, I did not feel the day was lost. After all, we had Chuck's Hawaiian Steakhouse ahead of us, reportedly a tropical Tiki kind of place with a long history in Santa Barbara. 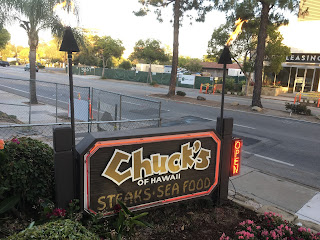 But the minute we stepped into the darkened restaurant, I had a sinking feeling in my stomach. There is nothing tropical, nothing Tiki, and nothing appetizing about Chuck’s. It is Sizzler with bad lighting, and worse food and no unlimited shrimp. The Mai-tai is the only drink on the menu that is tropical, and it tasted like Captain Jack Sparrow drank a bottle of rum and then pissed into a Mai-tai glass. Yes. IT WAS THAT BAD. 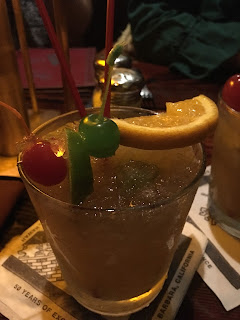 The salad bar, given so many glowing reviews online, turned out to be something that I would expect to find in a hospital cafeteria circa 1954. With basic toppings, a steaming drawer of smooshed bread, a huge bin of butter slices crammed together, and little else to recommend it, I started to have a sinking feeling about the entrees. 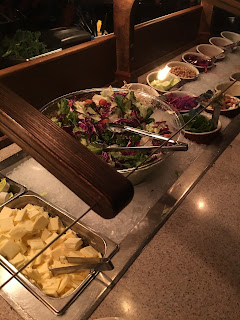 The scallops were tough, the steak was rubbery, and the Hawaiian chicken was picked at and then left half-eaten alongside a clump of sticky teriyaki rice. The grilled artichoke came with mayonnaise that was so nostril-burning with raw garlic that I dipped only modestly. And for me, the world's biggest mayo fan, to dip modestly means that catastrophe has descended on the sweet, peaceful valley of Sauceland. If the leftovers are so bad that you decide not to take them home to give to the dog, then you have landed in the restaurant equivalent of Davy Jones' Locker. It was, I do not jest, one of the worst eating experiences I've had in Santa Barbara, in no small part because the bill was eye-stabbingly painful. I can eat in a dive, if I am paying $10 for dinner. But we limped out of there for about $36 each. 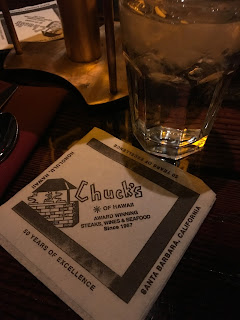 I suppose the moral of the story is that if the napkin feels the need to inform you that it is an award-winning restaurant, you really should run in the opposite direction. Run to the amazing retro salad bar at Rusty’s. Run to Paradise Cafe and order the grilled artichoke. Just run any which way but back to Chuck's, because that is one Bermuda Triangle you do not want to be lost in.