Forsaken by the Tiki Gods: A Review of VenTiki Lanai and Bar 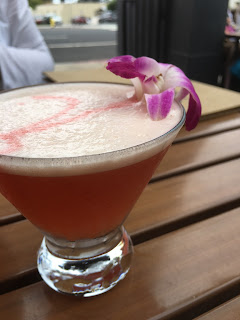 This being the summer of Tiki, and having had my optimism stained by bad Mai-tai's at Chuck's of Hawaii, I held much hope for VenTiki, a fun-looking Tiki bar and restaurant in Ventura. Sure, a forty minute drive away, but for the fearless Tiki enthusiast, what is forty minutes....besides, the FLOF has a car and she ain't afraid to use it. 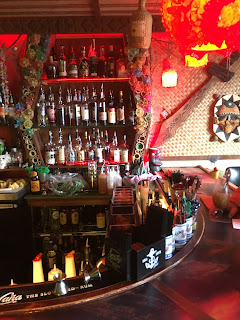 Restaurant experiences are highly temporal and subjective. You ate there the one night the chef ran out of mustard, and for the next thousand years you will bad-mouth their Welsh Rarebit. You went to the lakeside cafe the one day the algae bloom turned blue, and it shall forever be known in your lexicon as the blue fairy lake cafe. But there are some days when the stars simply don't align. Such as arriving at the quaint beach-side town to grey skies. Grey, dismal, and slightly chilly. And I didn't bring a jacket. But I soldiered on and arrive at the Tiki bar...to discover that a "she's 21 and starting her descent into alcoholism" party was happening, and it's a loud one. This I gleaned by the guest of honor wearing a necklace with a shot glass attached, attended by her parents, who apparently thought this was a great idea, and about 10 rowdy fraternity boys who were slugging back shots of rum. So, there was no room on the patio, which I will grant you was quite cute with its bamboo decor and fire pit. Walking into the main bar, a punch of stale rum hit us in the face, like pool-hall, eau d' Captain Jack's knickers. We eventually found a table outside, right by the water cooler with a wonky leg, so the table jiggled if we so much as breathed, and a steady stream of liquid leaked from the cooler over the concrete beneath our feet. 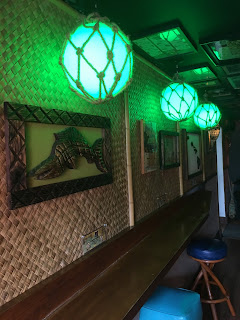 Still, I  held out hope. Until the cranky rockabilly waitress made it really clear that her garden was barren of any F***'s to give about our experience of this restaurant. And the bartender listened to my excited rant about collecting Tiki swizzle sticks, promised to bring me one or two, and then never came back. Isn't the whole point of Tiki the joy? The unmitigated, irrepressible joy of it? Not here. Not today, baby cakes.


Yet are there not many bad restaurant experiences that can be redeemed by alcohol? It was at this point that I made a massive, if not predictable misstep. I was, once again, lured to order a drink because it has a cool name. In this case, the Voodoo Temptress of the Seven Pleasures: rum, cherry rum, maraschino liquor, pineapple juice, and bitters. I really, really should've paid attention to that word: BITTERS. Because it was utterly bitter. It was un-fun. I did not finish it. The FLOF, who has far better instincts than I, ordered the Vicious Hibiscus, which is spiced rum, hibiscus, elder-flower liqueur, and lime. That drink was good. Very good. Unfortunately it was not my drink, and I refrained from commandeering it. All the while, trays of magnificent-looking zombies sailed by...there are, apparently, drinks at VenTiki that I would like to try...next time, stay away from the flashy names and go for the zombie!

The food...oh me...oh despondency...sushi so amateurish as to make packaged sushi at LAX look gourmet. I tried the veggie roll and was  not only underwhelmed by the taste, but I had to eat it in small pieces, as it quickly came unrolled. The eel roll...well, let's just say that I ended up picking the eel out of each piece, because it was kinda slimy, and I kinda felt like I was going to vomit when I took a bite. So out came the eel. What was left was not a dining experience. And it wasn't particularly cheap.


Had it been sunny. Had it not been Tits McGee's 21st birthday party. Had the waitress been nice. Had the Voodoo Temptress of the Seven Pleasures not double-crossed me. Had the sushi stuck together. Had there not been a baby crawling around our table collecting the grime from the sidewalk on her jumper (who brings a baby to a bar?) Had all of that not been so, perhaps this would be a different review. But it isn't.

Now is the time to ask, "Have I displeased the Tiki gods?" "What must I do to lift the curse? First Chuck's of Hawaii and now VenTiki...is my summer of Tiki about to dissolve into a forgettable dribble of sub-par rum? That cannot be. I must rally. I must hit back with Hurricanes so delectable that the world stops for a moment. I must don the Tiki sacraments, make prayers to the Tiki Gods, leave bribes if need be. I have to get my mojo back quick, because in two weeks we're throwing a Tiki Tea Party...and if that goes up into a rum-ball of flaming mediocrity, I may as well cash in right now and declare this the summer of malt liquor and Fritos. Let us hope redemption awaits, in the form of upside-down pineapple cake and Blue Hawaiians.