If you've seen the show Iron Chef, you know Cat Cora as the nerves-of-steel chef who brings a Greek twist to her comfort food. I would expect her to open a restaurant in L.A. or Las Vegas, not a burger joint on the Mesa here in Santa Barbara. But am I glad she did!

I am not your normal burger customer, being largely vegetarian. How to put this delicately... I have eaten desiccated, oaty, blasphemously awful veggie burgers up and down this coast and all around this globe. They invariably come with wheat buns, sprouts, and low-fat mayo. Not juicy, not even vaguely edible. What I hate most as a foodie is seeing a perfunctory veggie thing on the menu, ordering it, and finding that someone smeared some hummus on a grilled pepper and called it done. There's no reason for the veggie entree to suck, but it often does, and my heart breaks a little every time I see a gorgeous menu of super foodie dishes and then the one vegetarian thing is...as I said, hummus and roasted red peppers.


So I had reason to worry when I bellied up to the bar at Mesa Burger, where the entire point of the place is burgers. My eyes fell on the Shoreline: veggie patty/red pepper hummus/pickled red onions/sprouts/salsa verde. Yes, indeed, my old nemesis Le Hummus with his sidekick Mr. Sprouts. I want my vegan folks to have a good nosh, but for the love of heaven, do hummus and sprouts belong on a burger of any kind? I sucked in my outrage and ordered a veggie patty subbed into their signature Mesa burger with house-made pickles, thousand island, and a brioche bun with a side of fries.

The veggie burger came and was actually thicker and more burgerish than the beef burger that my buddy ordered. I took a big ol' bite of deliciousness...and, convinced that I'd accidentally been given a meat burger, I proceeded to spit it out, making little sputtering noises. Until my buddy took a taste for me, and along with the manager, assured me this was not meat. Its texture was a dead ringer, juicy and fatty, and frickin' delicious!

I definitely recommend a visit to Mesa Burger. Be sure to save room for dessert though. Cat Cora features McConnell's in ice-cream sandwiches and delicious root-beer floats! 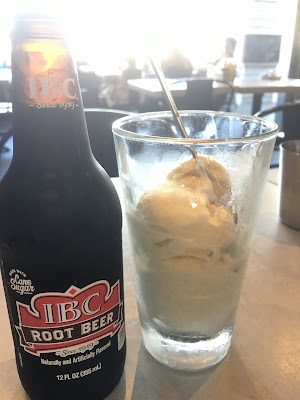 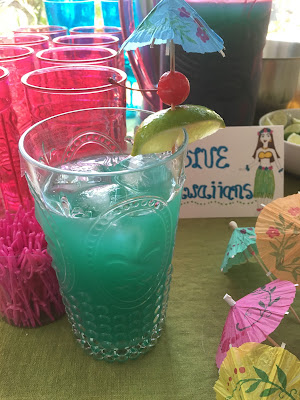 Enter the Blue Hawaiian. The Cadillac of Tiki drinks, beckoning with its blue glow. My favorite beverage: a mix of rum, blue curacao, and pineapple juice blended with coconut cream. However, blending drinks during a party sounds like a recipe for the guests to end up wearing Blue Hawaiians rather than drinking them. So, I went with a non-blended version that sneaks around coconut cream by using Malibu coconut rum (elixir of the budget-friendly gods).

While you can buy a bottle of MEDIOCRITY in the form of a sweet/sour mix, it's amazing when you make it fresh. Melt 1 cup granulated sugar into 1 cup water (30 seconds or so in the microwave). Then add 1 cup fresh lime juice and 1 cup fresh lemon juice. It's the difference between something that tastes like chemical byproducts and an amazing cocktail. Be warned though, this drink doesn't taste overly alcoholic, but that ninja vodka amps up the boozy woozy factor. 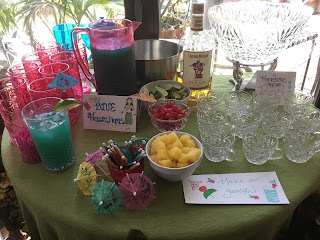 As they say, woman does not live on Blue Hawaiian's alone. Not even if she is stranded on a tropical island! No, she must have pineapple upside-down cake! Not just one variety, but two. Because no party around here is complete without going overboard on a theme. First, we made pineapple cream cupcakes. The First Lady of Frosting had the good idea to put a cherry and pineapple chunks at the bottom of each cupcake, and I have to say, it *made* the cupcake...that and the decorations. Little Tiki umbrellas perched like hats above the cupcakes. Second was Trisha Yearwood's upside-down pineapple cake. Her recipe calls for nine pineapple rings arranged in an 8x8 brownie pan...we were only able to fit four whole rings and then some halves. We speculate that you might have to cut out a chunk of each ring and squish it in to make it fit. Although I did briefly think, "Trisha Yearwood, you lying so-and-so," I continued on with the recipe. The result was decent. A nice vanilla flavor (because I put in triple the vanilla) in a fluffy cake, with caramelized pineapple on top. I have to say, there is farther to go in the matter of pineapple desserts. Although the cake and cupcakes filled their social obligations nicely, I was not transported to pineapple heaven. I am seriously considering using fresh pineapple rather than the canned stuff next time. Maybe lacing it with some Malibu rum... 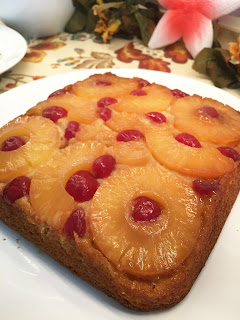 A word on maraschino cherries. Examine the bottles carefully. We had three different varieties. One bottle was natural (no dyes, so rather muted in color) and did well enough in the baked goods. The second bottle was comprised of plump gleaming ruby red cherries so chemically altered as to be unrecognizable in their origins. The third bottle...the third bottle had squished cherries that looked like the fruit equivalent of shrunken heads. They were too ugly to put on a toothpick, that is certain. All I am saying is that the cherry on the sundae is no benefit if it looks like the withered eye of a drunken pirate.

So, Blue Hawaiians and pineapple upside-down cake were had, along with potato salad, deviled eggs, Menehume punch, artichokes grilled with garlic oil and dipped in lemon-pepper mayo, and rainbow fruit skewers! The fruit skewers (idea from Pinterest) were a big hit, and it is fortunate that the FLOF assembled them, as I would've ended up with fruity "acupuncture" trying to handle the wood skewers! I actually think this idea would be neat to play with on other occasions (raspberries, blueberries, and baby marshmallows for fourth of July?) 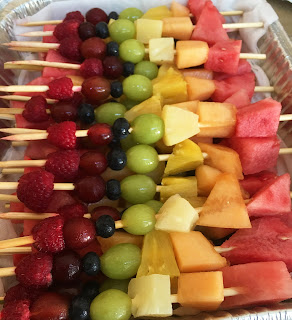 You might be wondering, what to wear to a Tiki party. A Hawaiian shirt? Perhaps a grass skirt? A coconut bra, if you're feisty? Sure, all of the above. The essence of Tiki is flip-flops and beachwear. Unless, of course, you are me. Then Tiki requires a hot-glue-gun extravaganza. Because I have things in my craft drawer and I have hands and I literally cannot stop myself. Four blue coasters, a pair of mermaid leggings and a blue fishing net, a bunch of blue beads, and two balls of discount yarn, and....well...things happened. Mermaidy things. Mermaid-ish, I should say, as I in no way resembled something that ever came from the sea. From the catfish nebula, maybe. The FLOF did her best with the mermaid gear but overheated early on. The result I am going to call pineapple chic. Catfish crochet and pineapple chic. So goes the glory of Tiki. Well, once you've had a blue Hawaiian or two, nobody cares what you're wearing anyway! Isn't the whole point to have fun? 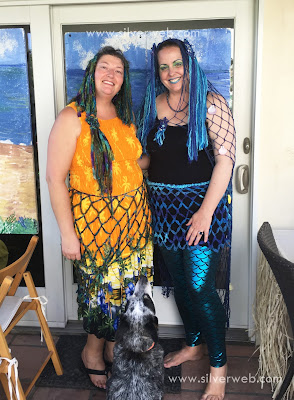 Wither Silver Webb after this consummate Tiki victory? A good question. I'll be veering toward the Chinese side of Tiki. Although some Tiki restaurants make a try at Polynesian food or Hawaiian food, one of the best ol'-fashioned 1950s standbys is Chinese food and Tiki drinks. You know, egg rolls and Mai-Tais, Kungpao chicken and hurricanes. The stuff of eating legend. I'd like to learn how to make a good kungpao sauce, a good Sichuan sauce, and maybe even figure out how to make those fried won-ton wrappers with red sauce and mustard. Possibly served with a Zombie or a Fog Cutter?
No comments: