Yurtle the Turtle and the Blue-ish Cake 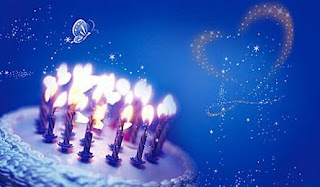 I love a good theme. If didn't have a job and a freelance business and literary aspirations and bills to pay, I would spend a good portion of each day plotting events, outfits, photos, and food all around fun themes. Recall, if you will, the Summer of Tiki, in which three months of my life literally disappeared into the bottom of a Mai-Tai glass. So I have refrained, in the interests of semi-adulthood, from behaving like the Lord of Toad Hall and dashing off on each new idea's whim. But woman cannot live on responsibility alone. And last week being the occasion of the First Lady of Frosting's (FLOF's) birthday, I was fairly jiggling as I inquired, "Would you say I've been well-behaved? Would you say I haven't been carrying on an extended affair with my hot glue gun? Would you say I deserve a treat?" The FLOF looked at me with wary side-eye, before I began peppering her with the usual question of "What color is your birthday party going to be this year?" Admittedly, the FLOF has never asked for a theme color for her birthday, but for the last two years, I suggested it, and possibly even picked the color for her. I'm not sure it's cricket to decide someone's birthday theme for them, but we (okay, I) Googled her number of years and found that Sapphire is the usual color for such anniversaries (and what is a birthday, if not an anniversary?) So, the Sapphire birthday theme was set. The game was afoot.

I had a vision. Modest, but in my mind, totally achievable. Blue birthday hats with sparkly blue pompoms and beads glued to them. Several craft store and dollar store visits later, I realized that blue birthday hats aren't a common thing to sell in quantity. Amazon will sell you 8 of them for a certain amount of money, but they weren't pretty ones. I ended up with one very large blue party hat...big enough, in fact, that with a proper brim, it would like a blue witch hat. But no matter. A few plastic flowers later, and I had blue flower hair clips, with beads and sparkly things glued to them. 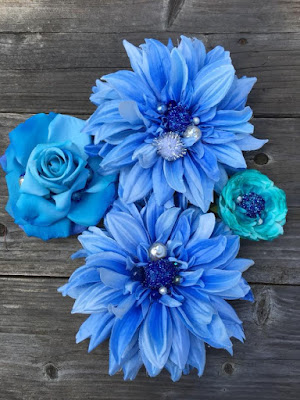 Which left the cake. Blue cake, of course. I found a recipe for Sapphire Blue cake that swears that if you add blue and violet food color to a red velvet cake, it will turn a lustrous sapphire blue. IT IS A LIE. If you add blue food coloring to a red velvet cake, it turns a muddy mauve gray. Luckily, my baking track record is well-established, and I had backup boxes of white cake mix. The idea was three layers with an ombre effect of different shades of blue. Kind of like this: 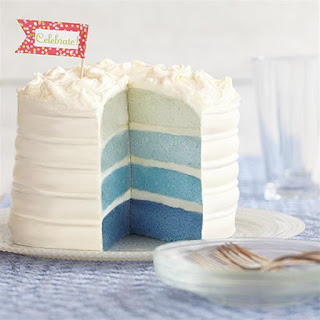 I liberally doused each bowl of batter with different kinds of blue food dye, pondered briefly the possibility that I was going to turn my innards a permanent blue, contemplated (i.e., furiously scrubbed at) the kitchen tiles' solubility in the face of blue dye, and then slid those babies in the oven to bake. 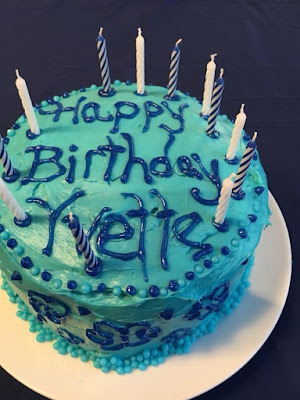 It turns out, the exterior of a blue cake actually turns a foul shade of green. Yurtle-the-Turtle green, like something that belongs on a camo vest. Why? Does it matter? Of course my blue cakes ended up with a thin layer of ugly green. Of course they did. The miracle is that they did not slither out of the oven looking like spinach death-cakes. The FLOF was certain that the frosting would hide the green edges. It did not. Which is not to suggest that the cake wasn't pretty, or that it didn't taste good. In fact, it was met with rejoicing and clamoring and most of it disappeared in under fifteen minutes. It looked okay, despite the fact that I'd already had a frosty beverage by the time I attempted writing the message on it. But there was no getting around the little green lines of Yurtle-the-Turtleness in each layer of blue. 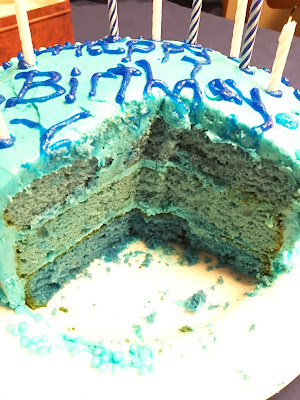 Ah well. It tasted good, with blue cream cheese frosting and a side of non-blue ice cream. I guess I can live with the Yurtle Blueish Cake. Maybe in another hundred years, housewives in the South will be competing to make the best crust of camo green in their blue cakes. 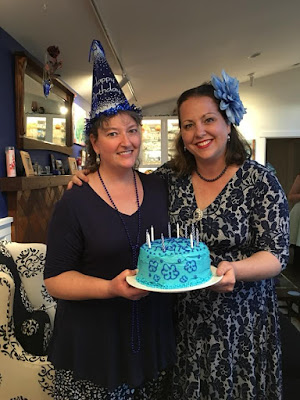 Well, it was fun, and everyone enjoyed themselves. In the department of blue cake, I am happy to report that nobody turned blue or felt blue after eating it, and really, as long as you have decent food coloring, it's not any harder than normal cake. It has me asking...what about green cupcakes for St. Patrick's Day? I've already proven that I can do green!

Interested in what the FLOF is up to? She has two new audio books out! Visit her here.